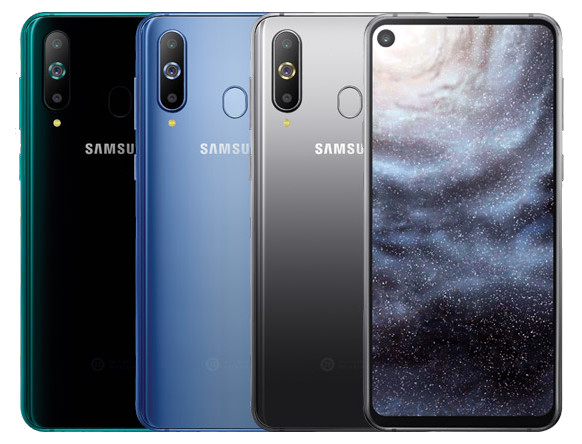 Samsung has officially announced their first smartphone with punch hole display the Samsung Galaxy A8s (SM-G8870). The smartphone is launched in China and come with an Infinity-O display that has a small cut out for the camera.
The Samsung Galaxy A8s sports a 6.4-inch (6.2-inch when curved) Full HD+ screen It is powered by Snapdragon 710 paired with 6gig or 8gigs RAM along with128 GB onboard Storage which is expandable up to 512GB via micro SD card. The smartphone runs on Android 8.1 (Oreo) and has Dual sim along with Dual VoLTE support.

On the camera side, the Galaxy A8s has triple rear cameras in which the primary sensor is a 24MP with f/1.7 aperture, the second one is a 10MP telephoto lens with f/2.4 aperture and the third camera is a 5MP f/2.2 depth sensor. For selfies, it has a 24MP camera which placed in a hole on the front of a display. The smartphone is backed up by a 3400mAh battery with adaptive fast charging support.
The Samsung Galaxy A8s will be available in Blue, Gray and Green colors and pre-order will start from December 21st in China. We will also expect this smartphone in India soon.