Recently Honor has launched their new Honor View 20 phone in China and now Honor India has started teasing the launch of the global variant of the smartphone. Honor View 20 landing page is teased on Amazon India with a ‘Notify me’ button, so we can expect the launch soon.

If we talk about the Honor view 20 then it is going to be the first phone in India with a punch hole display as kt sports a near bezel-less 6.4-inch Full HD+ display. The punch hole has a  small 4.5mm cut out for a 25MP camera. It is powered by Kirin 980 SoC with liquid cooling. The smartphone has 6GB and 8GB RAM options with 128GB and 256Gb storage.

The Honor View 20 will be the first phone with a 48 MP camera and also has another secondary lens of 12MP. It also has a TOF 3D secondary rear camera that can calculate distance based upon the time-of-flight of a light signal which can be useful in AR apps and games.

Apart from all this Honor has also managed to put a 3.5mm headphone jack which is becoming a rare feature on flagship phones. The Honor V 20 features a V-shape color gradient with a gleaming effect. It has a rear-mounted fingerprint sensor and backed up by a 4000mAh battery with support for fast charging.

Honor is planning to launch the device globally on January 22 at an event in Paris. So we can expect the India launch and pricing on the same day. 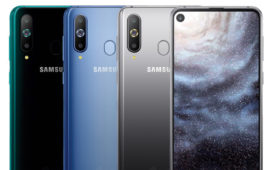